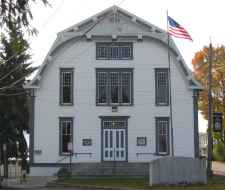 Beginning with the time before the white man came, this territory was occupied by the Five Nations of the Indian tribes. A branch of these was known as the Oswegatchie. They settled at the mouth of the Oswegatchie River and at a place on the St. Lawrence River later known as Indian Point, or Lowery's Point. This point was within the limits of the Town of Lisbon and has since been given to the City of Ogdensburg. Indian Point is within the State Hospital Grounds today. Oswegatchie is an Indian name meaning "Black Water".

This territory was originally discovered and occupied by the French who had already settled in Canada. Father Picquet built Fort LaPresentation at the mouth of the Oswegatchie River in 1749. The cornerstone of the fort is found today in the City Hall in Ogdensburg.

In the early days of our country's history, little was known of our part of America. According to our state law and records it was described as "waste land". It was known to exist because someone had seen it as he traveled up and down the St. Lawrence River.
There were no settlers in Lisbon and no settlements in these parts. There had been no explorers or prospectors. Perhaps there had been missionaries like Father Picquet but there were no definite settlements. On May 5th, 1786, the state, desiring to bring into market this land and other waste land, created what is known as State Land Commissioners who had charge of what was called the "waste". To speed up the scale of these lands, the Land Commissioners, on May 25, 1787, laid down a map of 10 townships supposed to be 10 miles square, beginning where New York State touched Canada on the St. Lawrence River and going up the river 50 miles. The survey or general of the state land laid out 10 townships as directed. At that time the state had been divided into counties and this territory was first part of Tryon County, and later part of Montgomery County. This part of the Adirondacks and beyond to the St. Lawrence River was not known and was called the ‘deer hunting ground of the Iroquois".

The French and the English both wanted to control the area along the St. Lawrence River and the eastern part of North America. The Iroquois Indians of New York area joined the English and helped them to defeat the French. The last French possession in what is now United States was Isle Royale or Chimney Island, which is situated near the mouth of Tibbett's Creek. In 1760 when Gen. Amherst came down the St. Lawrence River with his British soldiers, the French fortified Ft. Levis (levé) on Chimney Island. In August 1760, after a lengthy siege, the British captured Chimney Island and the French gave up. The English continued down the river and captured all of Canada.

Some of the first settlers in the Town of Lisbon were Samuel Allen and Andrew O"Neill. Mr. O'Neill was originally from Ireland but lived some years in Canada before crossing the River and settling on the land south of the river. He came in 1799 and built a cabin about 2 miles below Galloupville, now known as Red Mills. Mr. O'Neill and his family were buried in the O'Neill Cemetery, which is closed to the river.

As there was no grist mill near Mr. O'Neill's home, he had to take his grain to Canada to have it ground. Later a grist mill was built at Red Mills.

One time, when Mr. O'Neill was away, some Indians came and made so much noise that Mrs. O'Neill locked herself and the children in one of the cabins for the night. Later Mr. O'Neill reported this to the Indian chief and the next time Mr. O'Neill was away the Indians returned. They led one of their braves to a tree in front of the cabin, tied him and proceeded to paddle him. Mrs. O'Neill tried to stop them but couldn't. Finally the Indians left. The O'Neill's thought that the captive was the one who had made the disturbance before and they were punishing him. That was the only time the Indians bothered them.

When this area near the St. Lawrence River was sold at auction very little was known about it. It was prophesied that "no doubt it is fertile soil and will in the future furnish a comfortable retreat for many industrious families. Both of these prophecies have proved true.

The Town of Lisbon lies on the St. Lawrence River, northwest of the center of the county. Its soil is fertile and well adapted to the growth of various grains and fruits raised in this latitude but more especially for grass. The surface is usually level, slightly undulating in places and is watered by ten miles of water front, and in the rear by numerous brooks, streams, and creeks. The islands in the St. Lawrence opposite the town near the American shore such as Isle au Galloup, the historic Chimney Island, Tick, and Lalonde's Island are parts of the Town of Lisbon. They increase the acreage over several of the other town of the county.
Samuel Allen was the first to commence a settlement on the banks of the St. Lawrence River in Lisbon. He and his family and others from Vermont settled just below the Galloup Rapids, in February 1797, but he sold out in 1802 and went to Madrid. Andrew O'Neill came in 1799 and settled about 2 miles below Galloupville. Another early settler was John Tibbetts, a descendant of early Puritans.

When the land commissioners of the state laid down the 10 townships there was no real survey, and no one knew what he bought. The townships were numbered and Lisbon was number 5. The township map was on file at Albany and anyone could go there and examine it by paying 6 cents for the forenoon and 6 cents for the afternoon. The sale went to the highest bidder, and when the time came there was just one bidder for each parcel of ground.

The first occupation of the settlers was to provide food, which they did by hunting and fishing. They ate fresh and dried venison, beechnuts, walnuts, butternuts, and maple sugar. The meat of wild animals was an important addition to their food. They had to clear away the trees to build log cabins and to make room for farms. They raised corn, potatoes, turnips and hay. The black salts industry was very important, as cash was needed to pay taxes and buy cows and oxen. Cash was received for black salts and squared timbers. Merchants in Ogdensburg erected pearling ovens, bought black salts and made pearl ash, which they sold, for cash in Montreal, Canada. Lumber merchants bought squared timber in the winter, made them into rafts and in the spring floated them down the river to Quebec, Canada. Canada was important in carrying on the commerce.

One of the early settlers was Mr. Smith whose farm is still run by descendants of the first family. They built a log house near a brook from which they obtained fish for food. In the woods they found wild animals from which to obtain meat. They raised their own food and from their sheep they got wood for their clothes. Mr. Smith walked to Ogdensburg, a distance of 10 miles, to get his wheat ground into flour and carried the flour home on his back. The first and second log cabins burned but the third cabin remained for many years. It is thought the reason for so many fires was that they not know how to build chimneys properly. Mr. Smith worked on the railroad construction in 1849 and 1850 to help pay for his farm and also add 5 acres to it. Mr. Smith thought education was very important and one time he bought a dictionary home from Ogdensburg instead of the flour, which they needed for food.
Fortunately the soil of the Town of Lisbon is fertile and the surface is level, slightly rolling in places. It was a good place to raise grains and grass. The farmer raised vegetables, corn, hay, wheat, cows, sheep, oxen and poultry for there own use. They also made butter. They used the wood from the sheep for their clothes, which they made by hand. Later factories were located throughout the town to which milk was taken to be made into butter and cheese. This was their chief source of income then. After the railroad was built through the town, butter and cheese were shipped to New York City by train.
About 1912 a station was opened at Lisbon which took the fluid milk and shipped it by the Rutland Railroad to N.Y.C. every day. Later Sheffield Farms operated a milk station, shipping milk to N.Y. City.

About 1930 a powdered milk plant was added. The skim milk was made into powdered milk and the cream went to N.Y. City. In 1941, the Doughnut Company rented the plant and powdered eggs. Then they made powdered sugar from Karo syrup and honey. The milk is sent to NYC by tank truck today.

Lisbon was the pioneer in the religious organizations of the North Country. Several churches were organized during the history of the town. The first was the Associated Reformed Church, organized in 1802. Later it was moved from Red Mills to Flack's Corners and in 1856 a building was erected in the village of Lisbon, known today as the United Presbyterian Church.
Of course schools were built, the first one in the northwestern part of the town. Later the town was divided into 32 districts but in the 1950 a central school district was formed and the children are brought in by bus.

A public library was built and endowed by Mr. A.B. Hepburn and is of great value to the people of the community. The community room is the center of many gatherings such as parties, meetings and church affairs.

When the seaway was built, many people moved into the town. Trailer, camps and apartments were added to house the people. Modern highways, stores, garages, feed mills, a bank, a restaurant, and a Post Office still serve the community.